The gift of love: the evolution of the chemical composition of insect food gifts 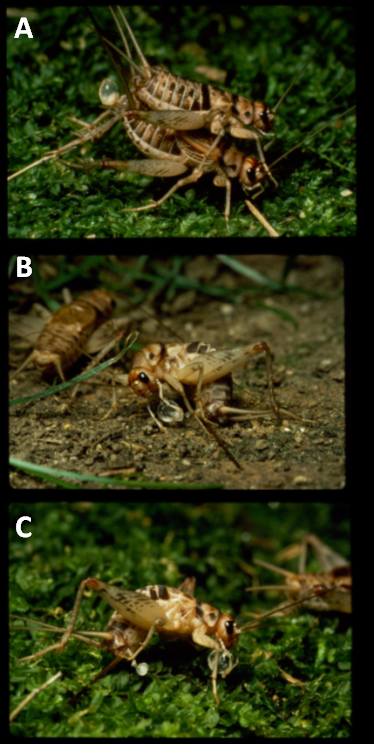 Nuptial food gifts are food items given by males to females at copulation and are an integral feature of the mating systems of a wide variety of insects. A recent hypothesis suggests that nuptial food gifts are not gifts at all, but devices by which males exploit their access to female physiology to manipulate females in ways beneficial to males, but harmful to females. This hypothesis predicts that the chemical composition of nuptial food gifts should be shaped by the divergent interests of males and females over the paternity of a female’s offspring.

The hypothesis will be tested in a cricket species (Gryllodes sigillatus) in which males offer females a gelatinous mass forming part of the male’s spermatophore and consumed by the female after mating (see image). Spermatophylax feeding deters the female from prematurely removing the sperm-containing portion of the spermatophore (ampulla), and thus serves to entice females into relinquishing some of their control over the insemination process. More recently, research has shown that this food gift contains substances that lead to a transient decrease in the sexual receptivity of females, but that female G. sigillatus have evolved reduced responsiveness (i.e. resistance) to these substances to retain control of their mating rate. Thus, there are two sexual conflicts that arise from the provision of a spermatophylax: 1) a sexual conflict over whether or not the female agrees to feed on the male’s nuptial gift and 2) a sexual conflict over female remating behavior that appears to be mediated, in part, by refractory-inducing substances contained in the spermatophylax.

This Leverhulme Visiting Professorship will enabled distinguished Professor Scott Sakaluk (Illinois State University), to visit the Centre of Ecology and Conservation (University of Exeter) to test the hypothesis that the chemical composition of the male spermatophylax in this species has been shaped by the sexually antagonistic coevolution resulting from these two conflicts. This work will integrate the latest biochemical and proteomic analyses with behavioural assays to identify the chemicals in the male spermatophylax that control female feeding and remating behavior.

The mating sequence in Gryllodes sigillatus. (A) The female (top) mounts the male (bottom) and transfers a spermatophore, (B) the female dismounts after mating and immediately separates the spermatophylax (large gelatinous structure) from the sperm containing ampulla and (C) continues feeding on the spermatophylax, leaving the ampulla (white structure attached to female) intact to transfer sperm into the female reproductive tract. Photo courtesy of David Funk.