Of earth and stone: material culture and natural science in the ancient Mediterranean

Through the analysis of organic matter, minerals and stones, Alice Clinch investigates how ancient Mediterranean societies related to their natural environment and landscape

Ochre is one of the oldest pigments in the world. It appears in Palaeolithic societies – used for cave paintings, burials and in medicinal and social practices – and has been in continuous use throughout history to the present day. In Greek crafts ochre featured prominently being readily available in the landscape. This has often led to it being viewed as a common and insignificant material, in comparison to more costly pigments, such as imported cinnabar or tyrian purple – an expensive pigment produced from the secretion of molluscs.

Yet economic value does not necessarily equate to cultural value. As ochre was sourced from the local environment, it was a more accessible material for communities. Consequently, significant sociocultural concepts were attached to it, often being used in medicinal or magical practices. My project reconsiders the use of natural resources – specifically rocks, minerals and sediments – in ancient Greek visual and material culture, to understand how organic materials were perceived in past societies and what cultural properties were bestowed on them. It charts how human–environment interactions developed in accordance with knowledge of the material and elemental properties of earths and stones and how this dictated the technological process towards an artefact’s final form.

Intersecting art and science, I will investigate ancient art through the lens of materials analysis, using microscopic analysis and X-ray fluorescence spectroscopy alongside ancient texts, linguistic analysis and technological production techniques. My research emphasises how ancient societies’ approaches towards the natural sciences impacted their relationship with and use of the environment. Focusing on earthworks, stone-working and pigment production, it determines how socio-cultural concepts of the environment were embedded in ancient art, from a material’s extraction in the landscape to its final crafting.

Many ‘mundane’ materials in circulation in the ancient world had significant social implications, even if not reflected in their economic value,making them worthy of inclusion in wider discussions on Greek art and technology. 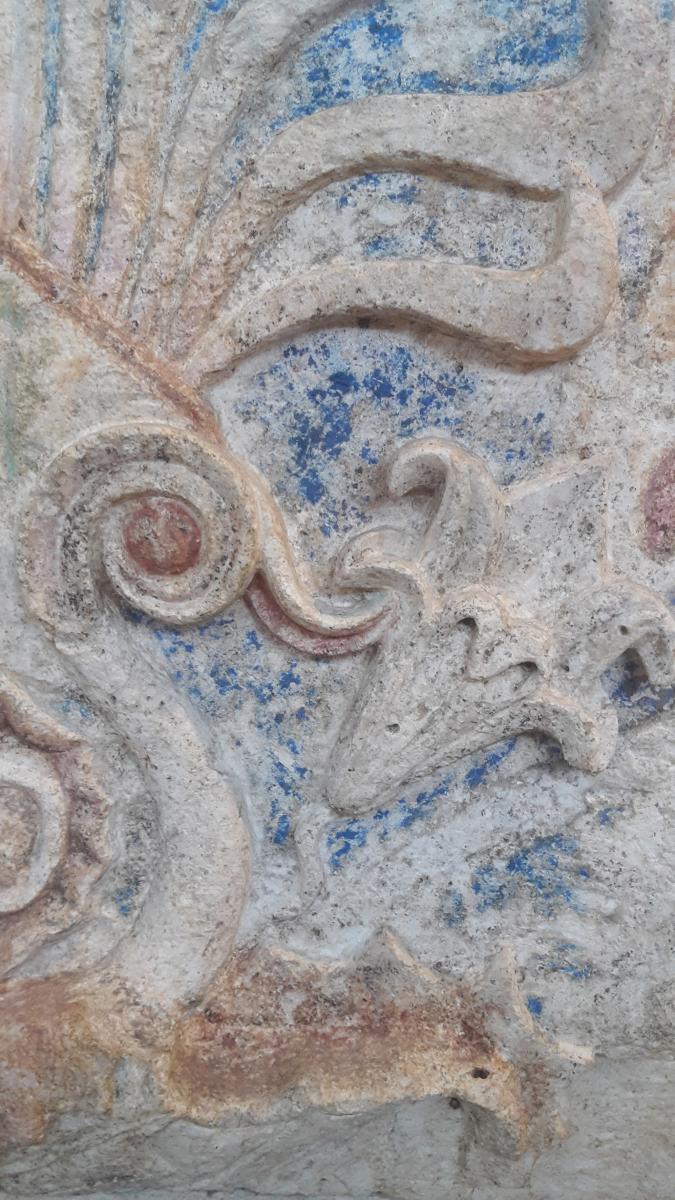 Stele with painted detail from Derveni Cemetery, on display at the Archaeological Museum of Thessaloniki. Photograph: Alice Clinch.