Lia Betti and Todd C. Rae test the hypothesis that the size of the human birth canal is constrained by the need to support abdominal organs in a vertical bipedal posture 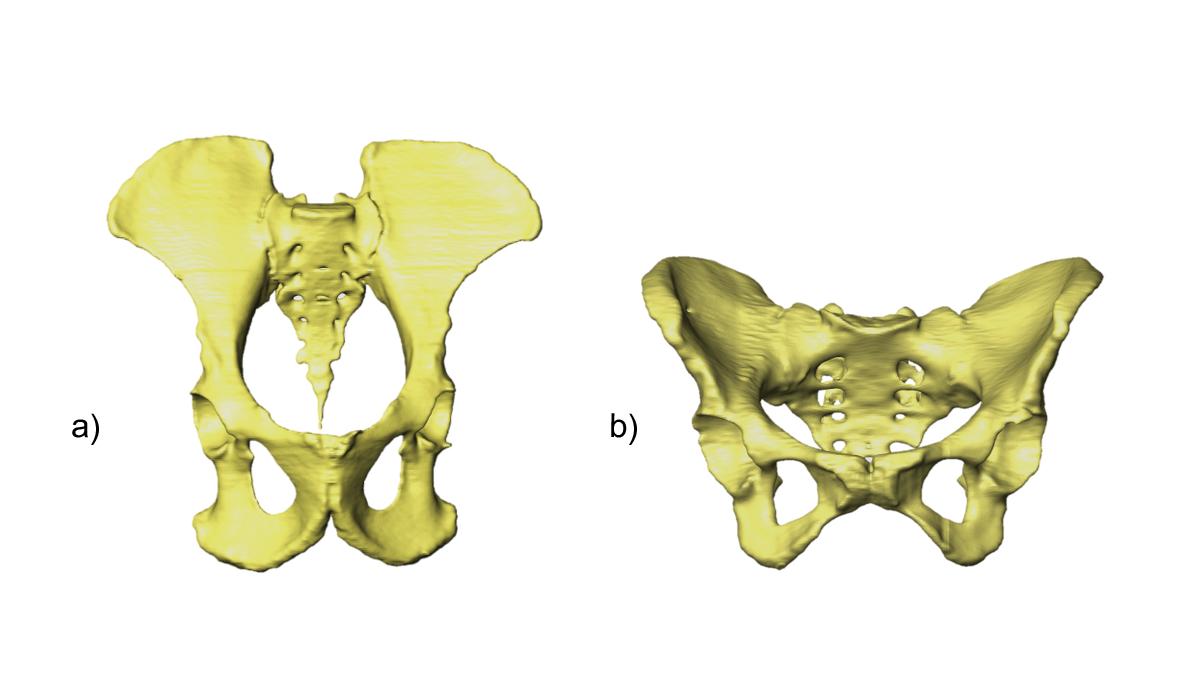 Reconstruction of a chimpanzee a) and human b) female pelvis from CT scans. Credits: Lia Betti and Todd C. Rae.

In comparison with other large-bodied apes such as chimpanzees, humans have a difficult, dangerous birth process. While our closest evolutionary relatives have a pelvis with plenty of space for the offspring’s head, the birth canal in Homo sapiens is similar in size to the foetal head. In approximately 5% of human births, the canal is so small that birth cannot proceed without medical intervention; this can lead to permanent impairment and even death of the mother and baby. But exactly why this tight fit has evolved has remained a mystery.

The classic explanation for our birth difficulties is that our pelvis is adapted to bipedal walking and now represents a compromise between, on one side, the need for a narrow, compact pelvis for walking efficiently on two legs and on the other, a pelvic canal spacious enough to let though a large-headed baby. While this explanation is perfectly logical, subsequent research revealed no evidence of such a trade-off. Women with a larger pelvis walk just as efficiently as men.

What then explains our small birth canals? What constrains the evolution of a larger human pelvis and easier birth? One potential explanation is that bipedal walking may limit pelvic canal size not for locomotor efficiency, but for organ support; muscles and ligaments of the pelvic floor hold up the internal organs in an erect posture. Larger birth canals would produce more pelvic floor stress, which can lead to organ prolapse, incontinence and difficulty in evacuation. In fact, there is good evidence that women with wider birth canals are at higher risk of pelvic floor dysfunction.

Our Leverhulme project aims to test this hypothesis by looking at the variation in size and shape of the pelvic canal across a wide spectrum of primate species, including humans. We will assemble a large dataset of primate pelvic data, using CT scans of museum specimens and reconstructing the 3D shape of the pelvic canal. By including species that vary in size, sexual dimorphism, locomotion and habitual posture, we will be able to test the effects of these different factors on the evolution of the birth canal across species. The results, in turn, will offer insights into the evolution of the birth canal in ourselves and our evolutionary relatives and shed light on the long-standing ‘obstetric dilemma’ faced by our species.