Collapsed or evolved? What happened to the Bronze Age Indus Valley Civilisation?

David Thomas’ transformative multi-method research places environmental systems at the centre of the analysis of the demise of the Bronze Age Indus Valley Civilisation; his team will model Indus socio-environmental relationships for the first time

Indus Civilisation pottery is found throughout the floodplain landscape.

In popular, and some scientific, literature there are many accounts of the demise of early civilisations, such as the Maya in South America and in Mesopotamia in modern day Iraq. Explanations are often associated with a dramatic ‘collapse’ due to war or sudden changes in environmental conditions. Digging deeper, robust evidence for such explanations may be lacking and alternative, less dramatic and more viable, explanations may exist.

In Asia, the Bronze Age urban Indus Valley Civilisation thrived from 4,500 to 4000 years ago but, apparently, dramatically collapsed, with extreme drought and a large earthquake event amongst ideas put forward for the abandonment of major urban centres. New archaeological data suggest, however, that rather than collapse, this society may have evolved and dispersed from a number of urban centres to be more widespread in the river floodplain landscape that today marks the fertile alluvial belt between India and Pakistan and between the Thar Desert and the Himalayas. 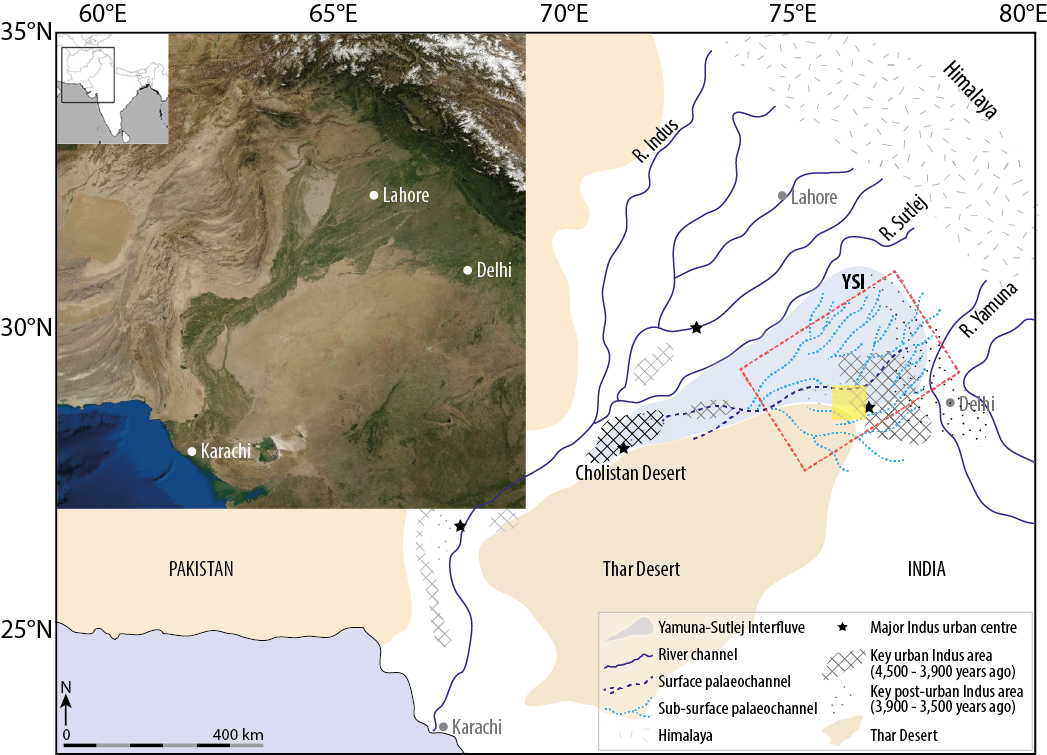 Our goal is to investigate potential environmental explanations for Indus Valley Civilisation change, using robust landscape data collected in the field and analysed in laboratories and through modelling to combine environmental and archaeological data. Remote sensing data shows that in the agricultural lands between the modern channels of the Yamuna and Indus Rivers, in an area of over 100,000km2, are the patterns of old buried channels, revealed in vegetation patterns and subtle topographic changes. Some of these seem to coincide with the locations of numerous dense archaeological finds that relate to the civilisation and its successive phases. Our multidisciplinary team from Oxford, Cambridge, Spain and India will use new remotely sensed analyses to target key hidden channel locations for sampling of buried sediments, which will then be dated using luminescence technologies to provide a detailed record of the age of past channels and the evolution of the fluvial landscape. Combining these data with spatially-detailed archaeological records through statistical-inference modelling will help us chart in parallel changes in the landscape and changes in archaeological distributions, allowing us to assess whether this urban civilisation really did collapse, or simply evolved and adapted to a changing natural environment.