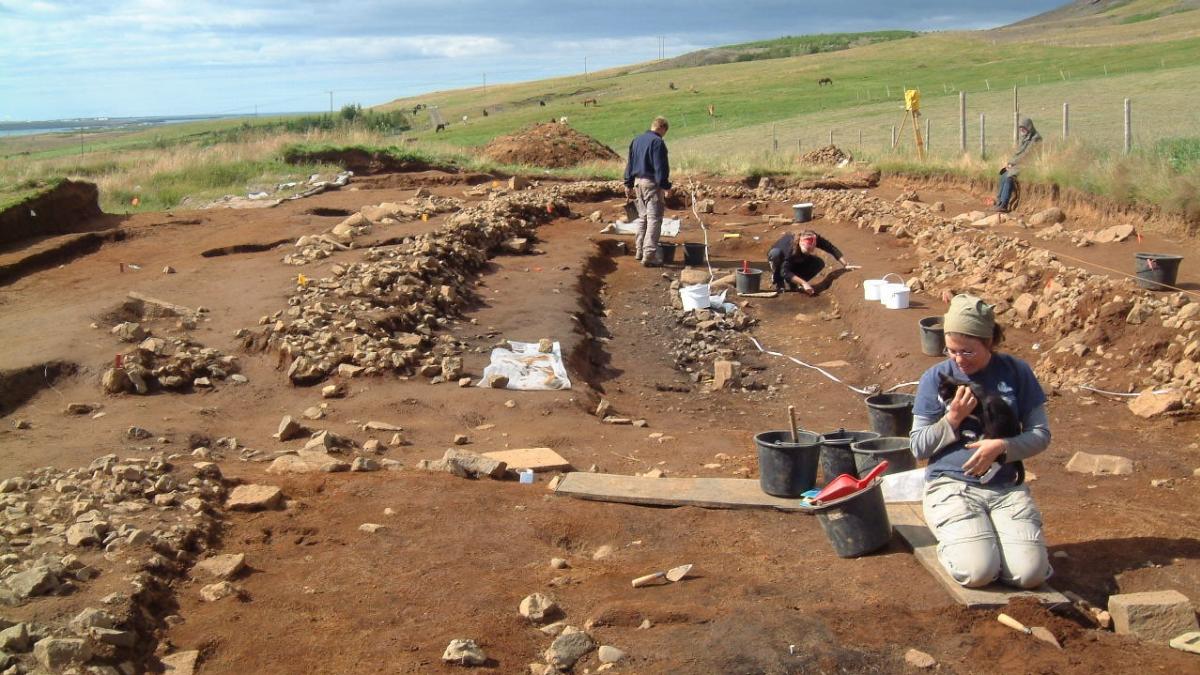 Excavations of the Viking Age house at Hrísbrú, Iceland, in 2008. The excavator in the foreground, holding a cat, is sampling the part the house that is thought to have held a cattle byre. Image: Karen Milek.

Like many of us today, the Vikings shared their daily lives with non-human species. On board ships, in raiding and hunting parties, in towns and trading centres, rural villages and farms, they interacted with animals on a daily basis – living close to them, communicating with them, caring for them, consuming them and using items made from them. Animals even shared their deaths and featured in burial rites and rituals that now seem shocking. As an archaeologist, it has always frustrated me that the closest we can get to the ‘lives’ of past animals is by studying their dead body parts. The analysis of animal and bird remains gives us fascinating insights into their diet, health and economic value, but can only ever give a partial picture of the range of roles animals must have had. Viking Age and medieval Norse poets, saga-spinners and artists give us a tantalising taste of a multispecies world that in many ways is unfamiliar and strange. Animals not only featured in the daily lives of farmers and townspeople, but were embedded in Viking world-views and belief systems, in magic and warfare and even in the personas and identities adopted by many warriors.

The COHABIT project will enable me and my team to construct a bridge between the forensic analysis of the residues animals left behind and the texts written in Old Norse and medieval Icelandic – the languages of the Vikings and their descendants. Our research will focus on the spaces and places where Viking Age people and animals lived, moved and died: in buildings, farmyards, pathways, streets and enclosures, burial sites and other ritual places. Using a technique known as faecal lipid biomarker analysis, we will extract from archaeological soil samples a class of organic molecules called 5β-stanols, which can be quantified using gas chromatography–mass spectrometry. Then, using multivariate statistics that allow us to compare the spectra of soil samples to a reference set of animal excrements, we will determine which physical spaces contained biomarkers of horses, cows, sheep, goats, pigs, dogs, cats, chickens, geese, mice, rats, bears, or deer. When the project concludes in three years’ time, we hope to have learned whether the new environments encountered by Viking societies, such as the ninth to tenth century towns that emerged in Scandinavia and the colonies they established as they journeyed westwards across the North Atlantic, stimulated novel types of interspecies living arrangements and social relations.