Can cerebral asymmetries be predicted from behaviour? 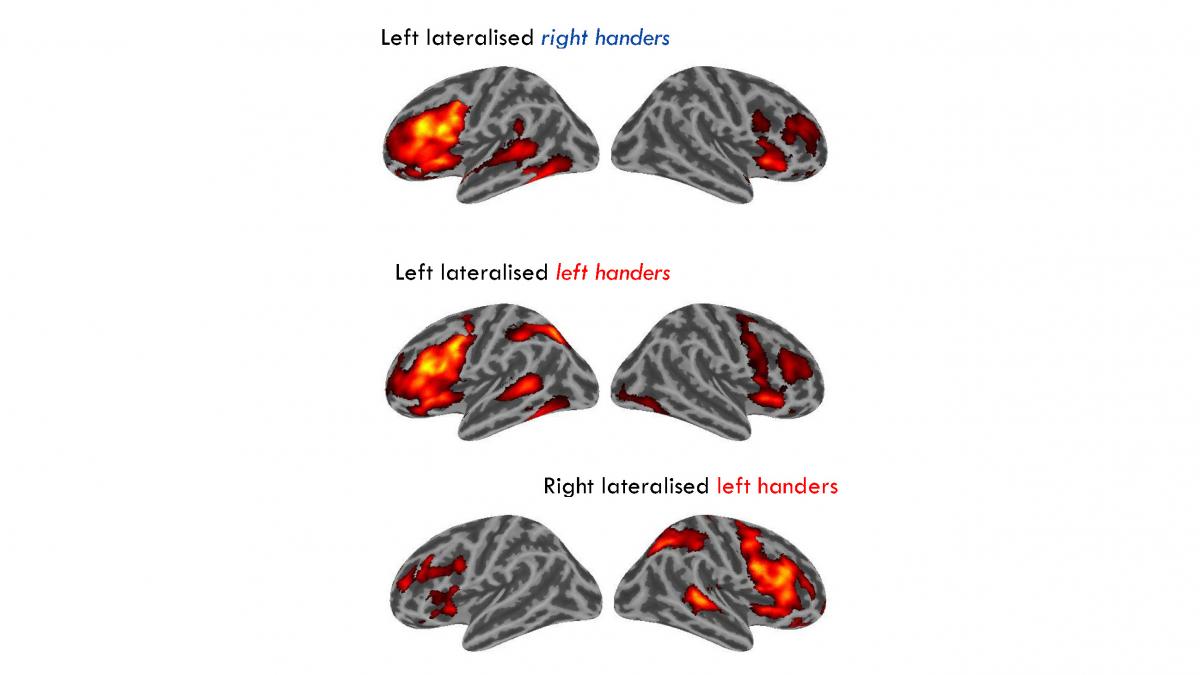 Brain activation patterns during a verbal fluency task, in right handers and left handers, grouped by cerebral dominance for language. To date there are no easy ways to identify individuals in the rare, right lateralised group (bottom panel).

A colleague of mine has referred to our species as ‘the Lopsided Ape’, given our rather dramatic (about 90% of us) behavioural preference for using the right hand for skilled activities such as tool use, throwing, gesturing and handwriting. In fact, that dramatic bias is related to an even more important asymmetry: the two halves of the human brain are specialised for different functions. The relationship between handedness and brain symmetry is, however, a puzzling one and left handers, ultimately, are the source of the puzzle.

Since the 1860s, data from patients with unilateral brain damage has confirmed a strong link between the left hemisphere and speech and language ability in right-handed people. This makes sense, as each side of the body is controlled by the opposite side of the brain. Therefore scientists assumed that left-handed folk should have a right hemispheric specialisation for these crucial human skills, as their writing hand is largely controlled by the right hemisphere.

The curious thing is that they do not. The best estimates to date suggest that 95% of right handers have left hemisphere specialisation, while only about 15% of left handers have right hemisphere specialisation. This ‘asymmetrical asymmetry’ has resulted in no small amount of confusion, in scientists and in laypeople, about left handedness. In fact, many neuroscientists and psychologists avoid including left handers in their experiments at all, often because of a misunderstanding of how often left handers are right hemisphere dominant (not that often in fact), or at best a worry about unwanted variability in any dataset that contains the poor maligned lefty. Currently, identifying people with the rare kind of cerebral specialisation for speech and language is incredibly useful and incredibly difficult in equal measure. Testing models of the biological constraints of language circuits, including reading in people with and without dyslexia, is an obvious goal. Understanding the genetic and biological underpinnings of any cerebral asymmetry, and their relationships to speech and language, is yet another. For these goals, and several others, being able to identify likely brain dominance for language, in individual people, safely and inexpensively, would be a revelation. My lab is doing exactly that: our preliminary results suggest that 80% of left handers with a particular behaviour profile are right hemisphere dominant for language. We are currently improving on this ‘hit rate’, and extending prediction to other brain asymmetries measured using fMRI.