The birth of crystals: measuring and understanding nucleation 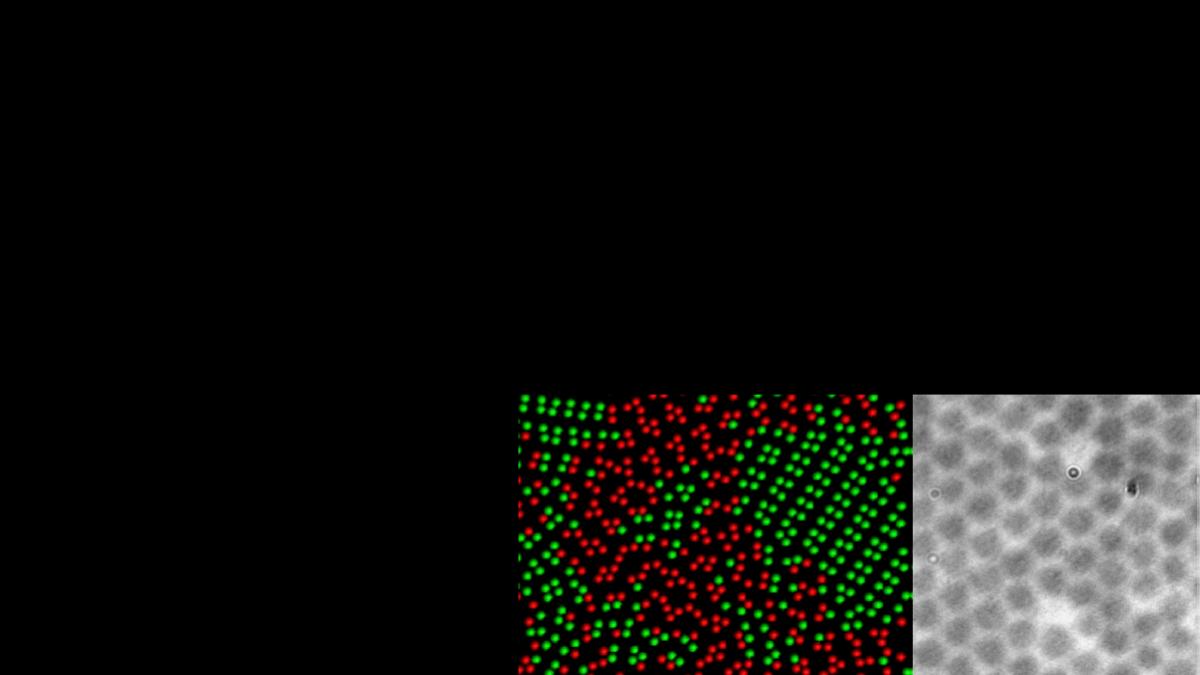 Left: a computer simulation of nucleation of crystal order, in a system of particles with a combination of attractive and repulsive interactions; right: an optical microscope picture of a colloidal crystal layer, showing defects including vacancies and dislocations. Here the spherical particles have diameter 1.1 microns.

Crystallisation is happening all around us: from ice formation on a cold winter’s morning, to sugar and fat crystallisation in chocolate manufacture and crystallisation of proteins in targeted medicine development. In all these cases, collections of molecules, whether water, sugars, fats or proteins, are transitioning from jumbled up disorder to an ordered regular crystal. This happens because under the right conditions, the molecules can reach a more stable energy state by lining up into ordered crystalline patterns.

You might have expected that such a ubiquitous, fundamental behaviour of materials would be well understood. Surprisingly, the first stage of crystallisation, the so-called ‘nucleation’ or birth of the first crystals, remains rather mysterious. There’s a good reason for this: while the laws of thermodynamics that drive crystallisation are well-established, where and when the first patch of ordered molecules appears is random. This makes studying that first nucleus difficult: you have to be looking in exactly the right place at exactly the right time – to nanometre and millisecond precision – and you have to be able to do it over and over again, reproducibly, to draw useful scientific insight.

Our project attacks this issue head-on. We will develop a method to trigger ‘on-demand’ crystal nuclei, highly localised in one small region of the sample under study, so we know we are looking in exactly the right place, and we can repeat over and over again. To localise we’ll use an ‘optical trap’, a gadget that holds a micron-sized particle in a precise place using focused laser light. To trigger nucleation, a specially polarised laser rotates the trapped particle, creating a localised disturbance in the sample. It’s been shown before that such a disturbance can trigger nucleation of a crystal from the disturbed liquid – but in our case, only in the close vicinity of the rotating particle.

Our experiments will start with simple molecules before moving on to complex proteins whose crystallisation is key to advanced medicines. Even with the simplest molecules there are big puzzles, such as what determines which ‘polymorph’ or specific form of crystal the molecules take up. In many medicines, even when the molecule has the right biological action, delivering it in the wrong crystal form can stop the medicine working.

Whatever the molecule, nucleation of crystals is fundamental to how matter behaves. The new scientific insights our new method delivers will, we hope, help transform the ‘birth of crystals’ from a mysterious puzzle into a well-understood phenomenon.