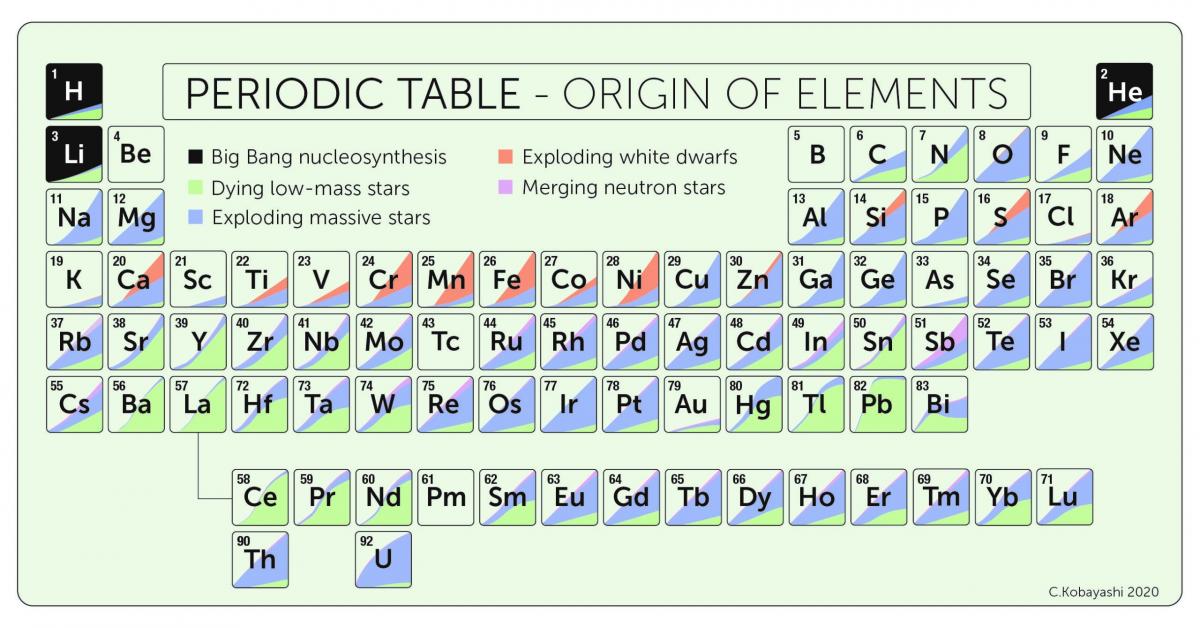 Explaining the origin of the elements is one of the scientific triumphs linking nuclear physics with astrophysics. At the beginning of the Universe – the Big Bang – only light elements such as hydrogen and helium were produced. Heavier elements such as carbon, oxygen, iron and gold were instead created inside stars. As Carl Sagan said, “human beings are made of star dust”. But what about mobile phones? Very heavy elements beyond iron, such as gold and palladium found in our phones, need more exotic astronomical objects to be synthesised – perhaps a merger of two neutron stars and/or highly magnetised spinning massive stars. I have been calculating the production of elements following the evolution of the Universe and my theoretical prediction is shown in the periodic table of chemical elements above.

At the beginning of the Universe there was no structure but only tiny density fluctuations. The Universe is made of 69% dark energy, 26% dark matter and just 5% normal matter, atoms, from which stars and galaxies formed. Over the next 13.8 billion years galaxies grow following the clustering of dark matter halos, stars are born and die in galaxies producing heavy elements there. Therefore, stars are fossils that retain the history of their host galaxies. At the end of their lives some explode as supernovae producing heavy elements that are distributed into the surrounding interstellar gas. New stars created from this gas contain elements produced by the previous generations of stars. By analysing the abundance patterns of the elements, it is therefore possible to determine how many and what kind of supernovae exploded in the past. I have been using this method – galactic archaeology – to study the origin of elements and the evolution of galaxies.

Since various complicated astrophysical processes are involved, I have been using a super-computer to predict the chemical evolution of the Universe, by reproducing available observational data. In our Milky Way Galaxy, detailed elemental abundances of millions of stars are measured with recent observational surveys on several telescopes. It is not possible to resolve individual stars in external galaxies, but some chemical abundances can be measured for nearby to distant galaxies. In this project I will predict the origins and spatial distributions of elements in the Universe across cosmic time, beyond the reach of even the best telescopes that we currently have.