From 2D to 4D: Ireland’s medieval crosses in time, motion and environment

Viewpoint, weather and distance, depth of carving, light conditions and scale – Heather Pulliam is exploring how these affect the viewer’s response to ancient monuments in a landscape 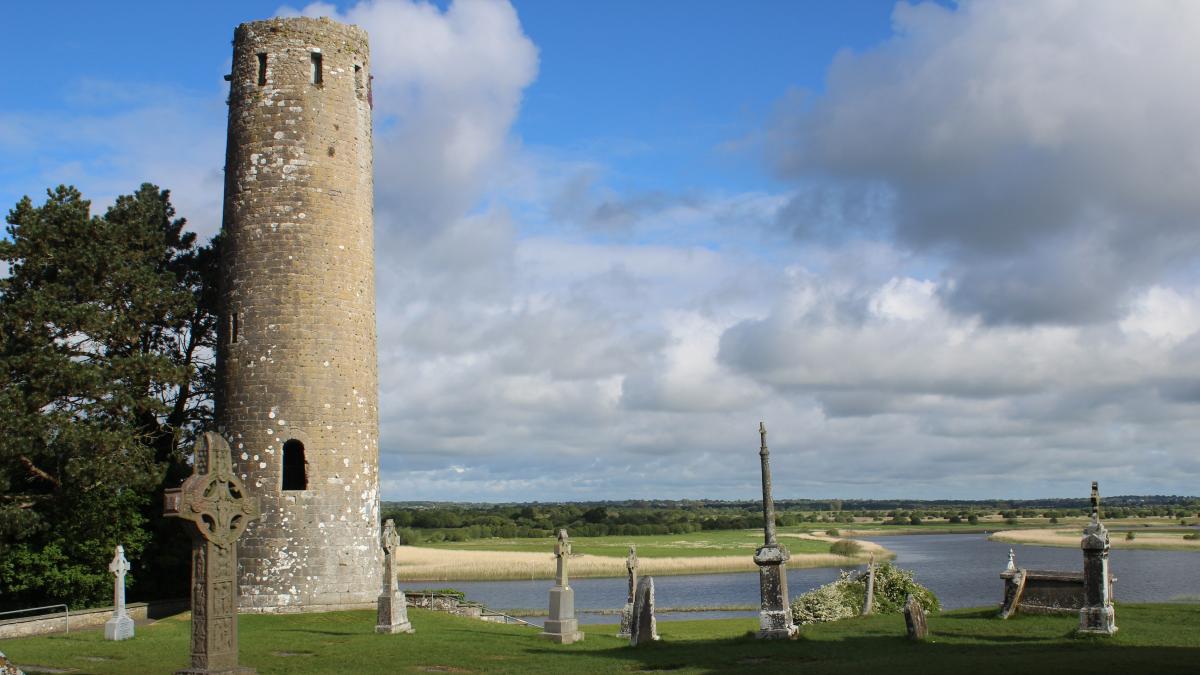 Cross of the Scriptures (replica), round tower and river at Clonmacnoise.

Ringed stone crosses standing in lush green fields have come to epitomise Ireland and Celtic culture. Little monumental sculpture survives from the period: these early medieval crosses carved with images of biblical, mythical and historical figures serve as rare, fragile witnesses to the beliefs and values of the people of northern Europe, c. 700–1100. A millennium of ice, wind and rain has eroded the carvings, so academics have largely concentrated on recording and identifying imagery, stylistic influences and inscriptions with an emphasis upon clarity, objectivity, precision and consistency. It never rains in this Ireland and the viewer’s eye is a disembodied lens.

My project aims to resituate these crosses in the living world through an investigation of time, motion and environment. Using digital images, the 3D models produced by the ongoing EU 3D-Icons project and drone footage, I plan to investigate how changing viewpoints, weather and distances elicit a series of encounters with a polymorphic, animated object. In particular, I will explore how the depth of carving, different lighting conditions, scale and the varied gestures and glances of the sculpted figures dictate the viewer’s response. 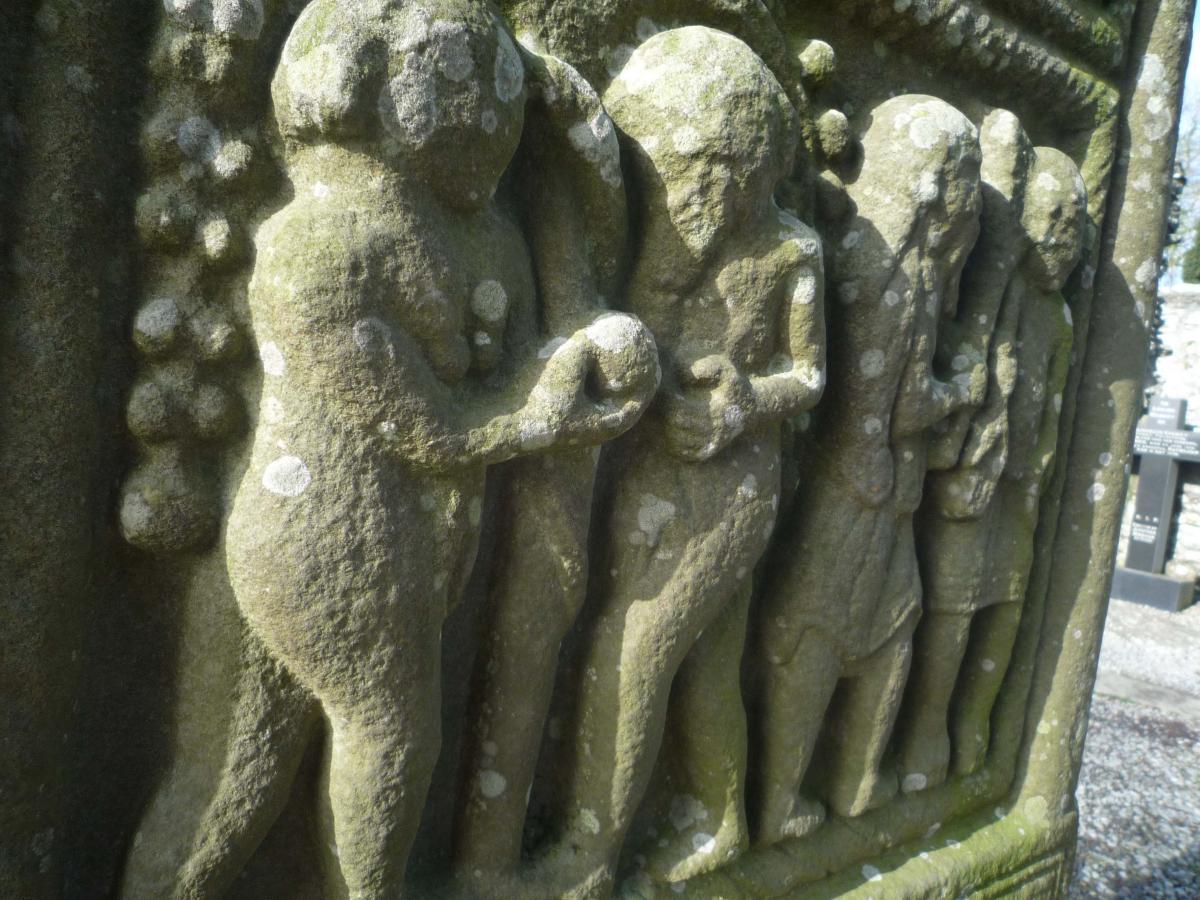 Eve offering Adam the apple in the Temptation of Adam panel at Monasterboice. 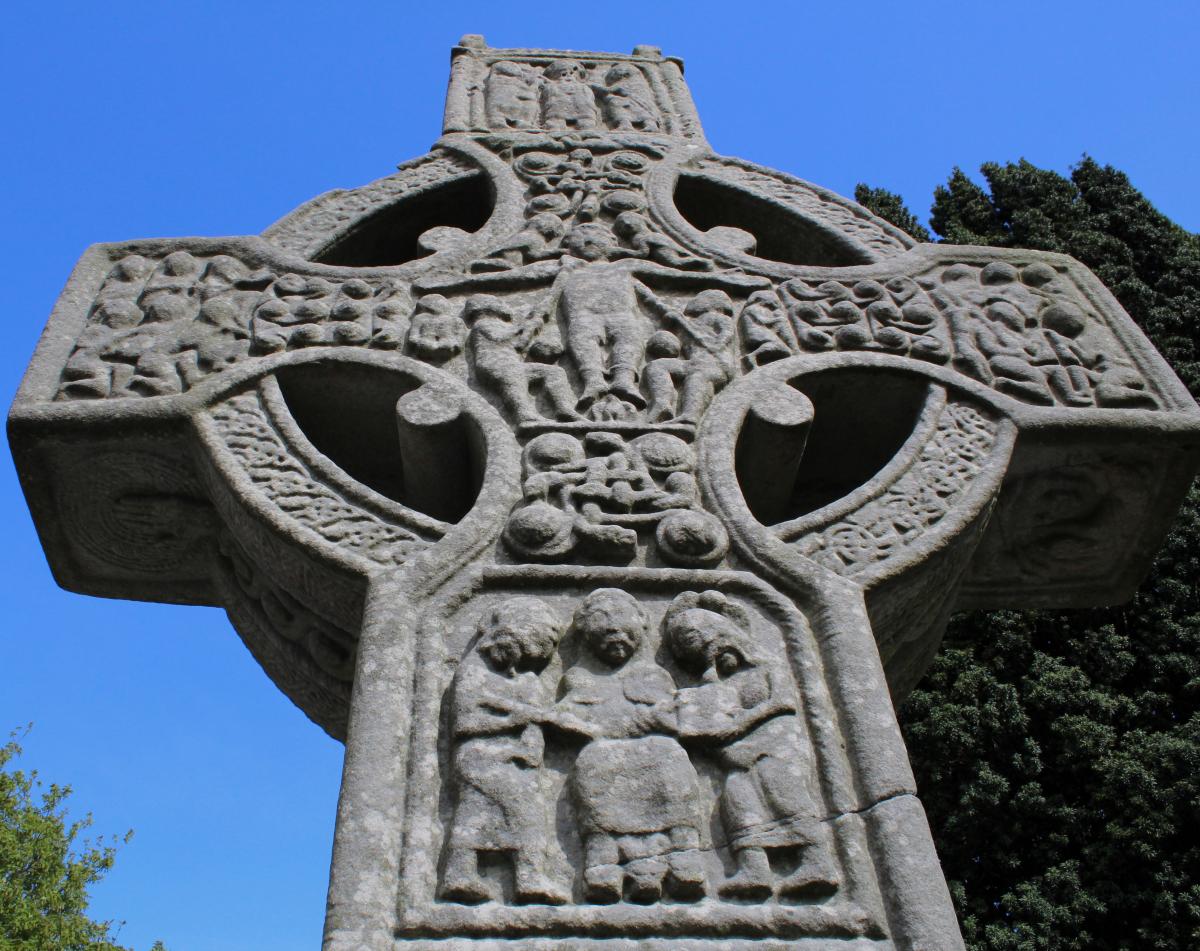 Cain killing Abel on Muiredach’s Cross at Monasterboice in the morning sun.

In the Temptation of Adam panel at Monasterboice, Eve breaks free from the pictorial frame, her frank gaze and proffered apple provocatively jutting into the viewer’s ‘personal space’. The encounter is intimate, even uncanny: Eve looks back – but only if you are standing in the right spot. Kneeling in front of the 4.5m cross, you must crane your neck to look at the image of Christ in Judgement positioned on the central cross-head: Christ’s adjudicating stare encompasses the damned and saved; the living and dead – but also the modern scholar and medieval monk.

My approach, termed phenomenological due to its emphasis upon experiential, embodied perception, is particularly suited to the Irish crosses, situated in dynamic landscapes, up to 5.2m high and with every surface covered in imagery. While the environs have transformed over the centuries, the changing weather and light and varied distances from which the crosses can be viewed are still preserved at Monasterboice – at least for the moment. High crosses at Kells, Durrow and Clonmacnoise have been moved into shelters in recent years due to conservation concerns. My project may inform future conservation and display, and will also serve as a record of the poetic and ephemeral qualities of the crosses in an animated landscape. Taking account of my project’s emphasis upon time and motion, a primary output will be an e-book illustrated by moving images.