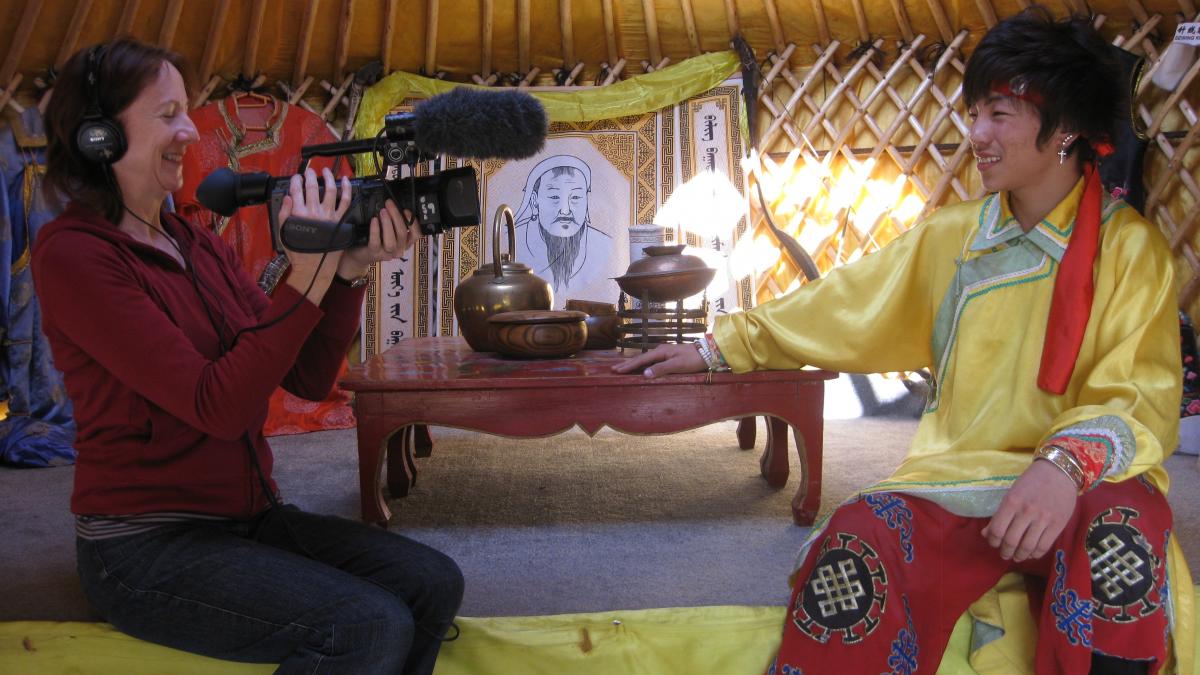 Sharon Macdonald filming Mongolian performer, A Da, in the China Nationalities Park, Beijing. Genghis Khan looks on. A Da is a brilliant singer and dancer and hopes to become a hip-hop star.

In 2011 China opened more than one new museum each day. Hundreds more are under construction, increasing numbers of which are concerned with collecting and exhibiting the culture of ‘ethnic minorities’. As an anthropologist and scholar of museums, with interests in popular understandings of cultural diversity, I was keen to see this phenomenon at first hand and to make contacts with Chinese colleagues with related research interests. I had never visited China previously and the Study Abroad Fellowship gave me the valuable opportunity to do so.

Minority cultural heritage is represented not only in museums but also in many other locations, such as tourist advertising, ethnic shows, and ethnic villages – which are sometimes also designated by the same word as ‘museum’. Of course, I could only visit a small proportion of the thousands of sites of minority cultural heritage within this vast country. It soon became clear, however, that representation is almost always in terms of the official categorization of 55 minorities, demarcated principally by distinctive dress, custom and ritual, and in some cases also language and script. The history of this official classification of 56 nationalities – the Han majority and the 55 minorities – is rarely told in public representations, and even when it is, there is no mention of disputes that there have been over it. The nationalities are presented as enduring facts, usually naturalized into a landscape; and China as a ‘happy family’ of diverse peoples. I did, however, occasionally meet museum guides who were critical of the ahistorical and stereotypical representations, having become so through studying Western anthropology and museology or through criticisms of displays made by ethnic minority visitors.

It should also be said that many of those who perform in ethnic minority villages and related sites seem to be extremely proud of their cultural distinctiveness. I repeatedly visited one ethnic village museum in order to learn more about daily life and work there. Many performers simply loved singing and dancing – even doing so when there was no audience. When I visited the dormitory where performers live – in rooms of four to five people all of the same nationality – some were avidly watching a television programme showing ethnic performance. Most had stories to tell about feeling lucky to have escaped a life of hardship in the rural locations from which they came. Some planned to return to their home areas, perhaps to set up tourist events, and others had dreams of remaining in the city and becoming pop stars.

Alongside the production of minority cultural heritage sites is an even more extensive destruction of existing sites through urbanization and development. An increasing concern of academics in China is how to preserve both physical heritage sites and also ‘intangible heritage’, such as traditional rituals and song. I was lucky to have the opportunity to learn about excellent work going on and to build contacts for future collaboration and exchange in the rapidly expanding, fascinating and complex, field of heritage study in China. 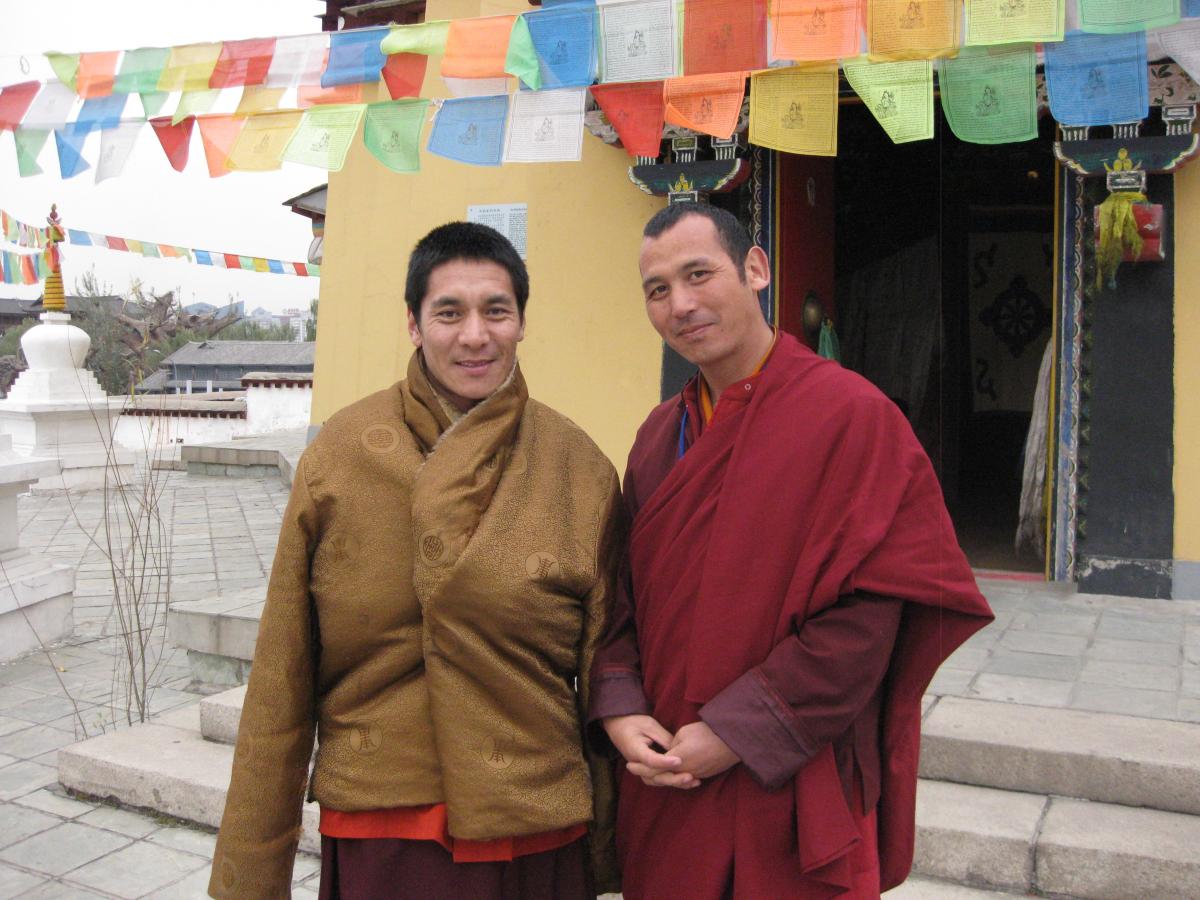 Two Buddhist monks outside the Buddhist temple in the China Nationalities Park, Beijing. 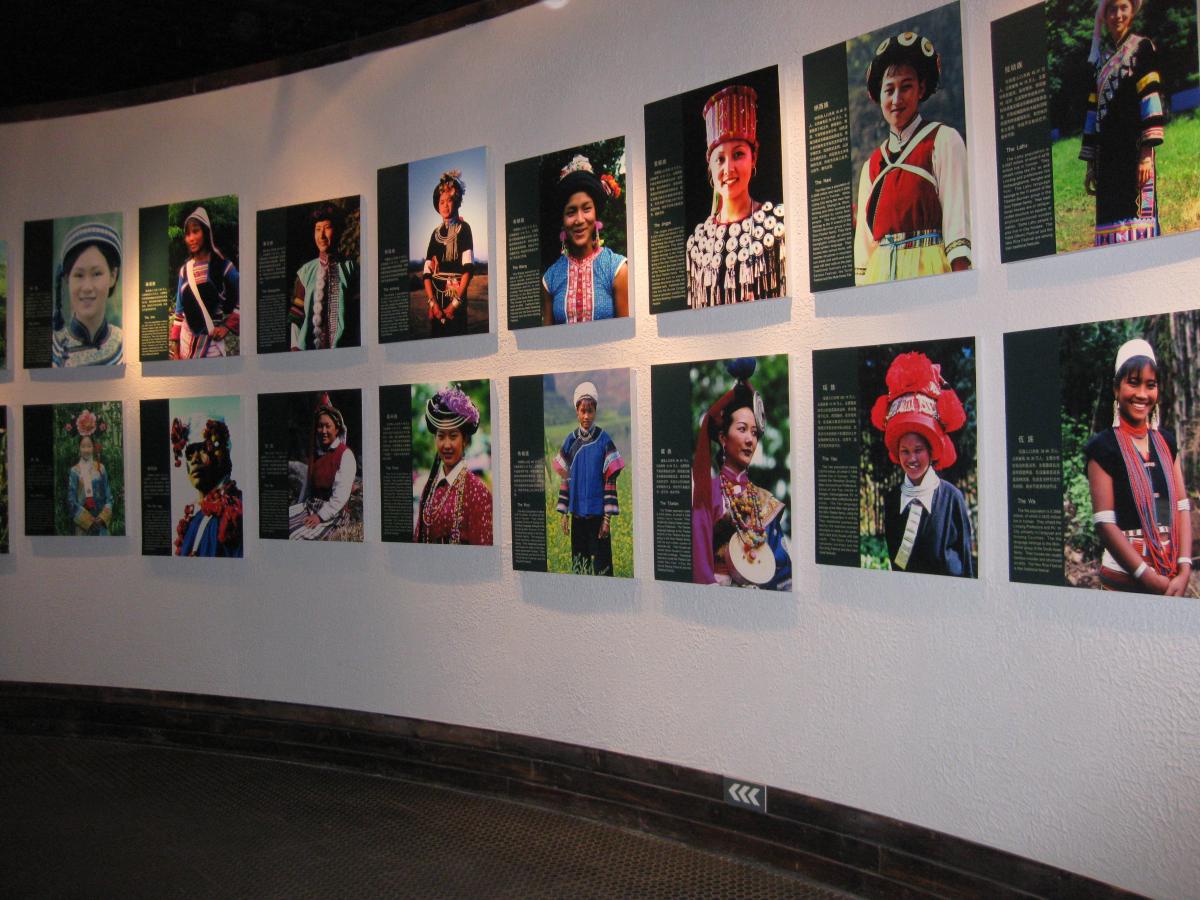 Display of minority nationalities in Yunnan Province Minorities Museum. All but one image is of a woman.