Jennifer Clack is studying the fossil fauna, environment and climate of the earliest Carboniferous Tournaisian stage, between 359 and 342 million years ago

My project extends research from a four year NERC-funded consortium grant studying the fossil fauna, environment and climate of the earliest Carboniferous Tournaisian stage, between 359 and 342 million years ago (mya). Colloquially known as “Romer’s Gap” because of a long-standing hiatus in the fossil record of tetrapods (vertebrates with limbs and digits leading to and including modern forms such as ourselves). The interval spans the time during which tetrapods must have begun to exploit land living in a serious way. We know this because fossils from the Late Devonian show tetrapods to have been fish-like multi-digited mainly aquatic forms. At the end of the Devonian, 359 mya, a mass extinction event apparently wiped out much of the fish and tetrapod fauna including these fish-like forms. In contrast, tetrapods from the mid-Carboniferous (338 mya) show a bewildering variety of shapes and sizes, many of which were fully terrestrial. Until now, lack of material meant that the study of the tetrapod move from water to land was hardly possible.

Our group has now made rich discoveries of tetrapods and other vertebrate fossils from newly recognised UK Tournaisian-age localities. We have shown that a wealth of material was there to be found, but no-one had ever looked. Among 10 new tetrapod taxa, we have found a range of transitional forms. Some are more closely related to Devonian taxa, others more closely related to later-occuring groups. They effectively close the ‘gap’ morphologically and chronologically between Devonian and Carboniferous forms, showing that even by this early stage, tetrapods had evolved into a wide range of habitats, body sizes, and taxonomic groups. They suggest that the split between modern Amphibia (frogs, salamanders and caecilians) and Amniota (mammals, and reptiles including birds) occurred during our study period. Our finds of other new vertebrate species include 7 new lungfishes and 10 new chondrichthyans, as well as new arthropods, helping us to understand the faunal ecology of the tetrapods. Our finds are giving us new clues into the recovery of vertebrates from the end-Devonian extinctions. It seems to have been quite rapid for tetrapods, and may not have affected them as much as previously envisaged. Our team has also been exploring the environment, climate, and sedimentology of the rock sequences that record this time, to set the tetrapods in their ecological context. 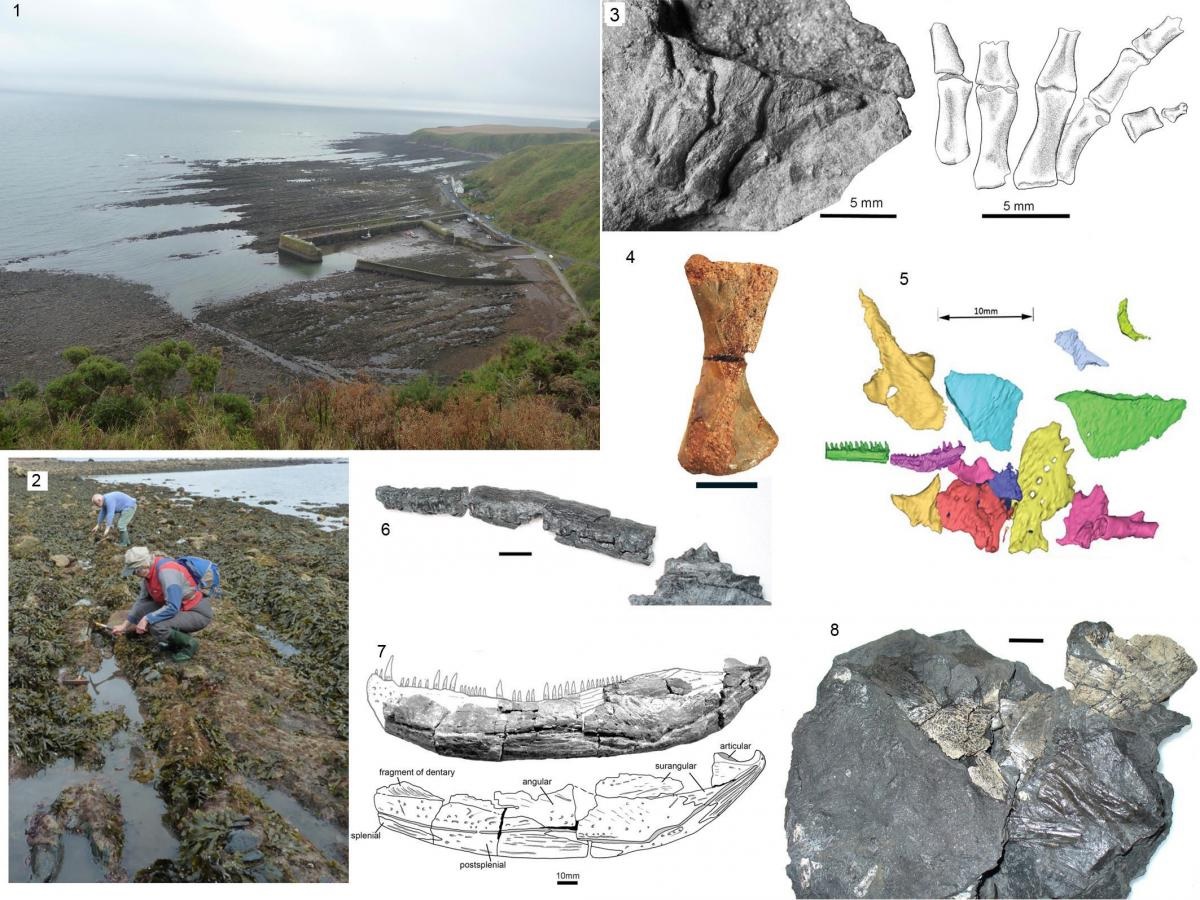 Burnmouth locality and its fossils: 1. View of Burnmouth from the coastal path, showing the harbour. The vertical beds pass from the Devonian-Carboniferous boundary near the bottom right of the photograph, to the Visean rocks just beyond the furthest cliffs towards the top of the photograph. 2. Jenny and Rob Clack collecting from near the harbour among the lowest Carboniferous beds. 3. The earliest known five digited autopod (hand or foot is not clear). 4. An isolated tetrapod femur. 5. Tetrapod skull elements revealed by micro-CT scanning. 6. An isolated tetrapod maxilla. 7. A partial jaw of a large tetrapod. 8. Tetrapod bones and belly scales. Scale bars 10 mm unless otherwise stated.
Our field work has collected literally hundreds of vertebrate specimens from localities in northern England and southern Scotland, at least 400 specimens so far, although we expect to find more as exploration and preparation continue. Many important specimens have been revealed by micro-CT scanning rocks that outwardly appear to contain nothing. All these specimens need to be prepared, identified, analysed, scanned and catalogued for accession into the collections of the University Museum of Zoology, Cambridge (UMZC). The Leverhulme Emeritus Fellowship will provide a part-time registrar/technician to undertake this work. This will assist my continued research, and importantly, make the material accessible to generations of students and researchers to come.