The dawn of time perception: German and French research 1860–1960

John Wearden’s aim is to discover more about early German time research, now largely forgotten and to trace the roots of early French research on time perception from the 1920s onwards 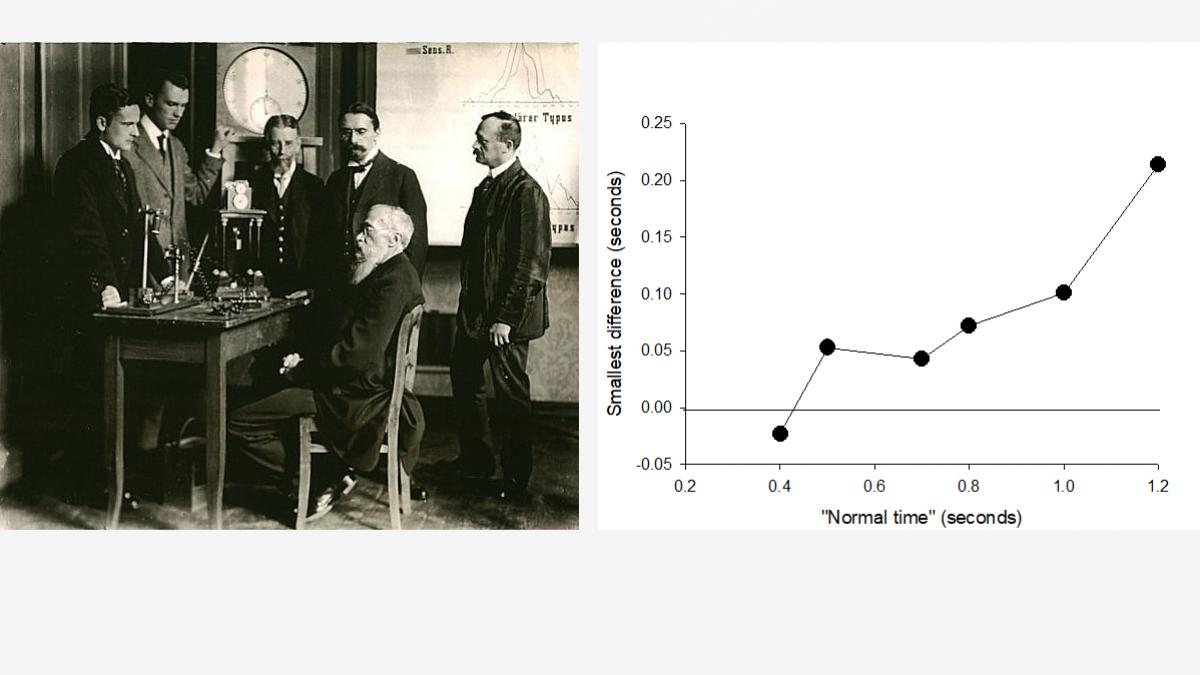 Left: Wundt and colleagues in his Leipzig laboratory. The apparatus with the dials is the Hipp Chronoscope, with a claimed timing accuracy of one millisecond. Right: data from Kollert published in 1883.

A reader will vainly scan many textbooks of perception to find a single mention of the perception of time, yet the subject has a venerable history dating from the days when psychology itself was born. My research will focus on two time periods, in two different countries, in which many of our modern methods and ideas were first proposed.

Nineteenth-century Germany, where perception and memory were studied systematically for the first time, is one. In 1868 Karl von Vierordt, working at Tubingen, laid the foundations of later work with his book Der Zeitsinn nach Versuchen (“The Experimental Study of the Time Sense”). The graph above shows results from a typical experiment by Kollert published in 1883, one of a number of studies of time perception performed in the laboratory of the famous psychologist Wilhem Wundt. The aim was to determine the smallest difference between two time intervals that could be detected, and here Wundt himself is the experimental ‘observer’. The other figure shows the seated Wundt, with colleagues, in his Leipzig laboratory, in front of a Hipp Chronoscope, an apparatus used to measure response time.

The early 1920s in France is another critical time and place. Under the supervision of Henri Piéron, later the most famous French psychologist of his day, studies began linking physiological process with the perception of time, particularly the potential effects of changes in body temperature and heart rate. This led to the publication by his pupil Marcel François of one of the most celebrated early studies of time perception, involving changing body temperature by diathermy. Where did this idea come from, and how were the methods developed? The Archives in Paris which bear Piéron’s name contain more than 100 letters exchanged between François and Piéron which it is likely no-one has read for nearly 100 years.

Some of the early German and French research is published, albeit neglected, but much, including doctoral theses and other sorts of documents, is not. What do these contain? How are the different historical figures linked in terms of their influence on one another? My research is intended to bring to light where many ideas, influential even today, came from and how the pioneers of the subject investigated and developed them.