Punk, politics and gender in the UK

Kirsty Lohman is looking at how cultural production in the UK can be linked to political developments, particularly within feminist punk scenes 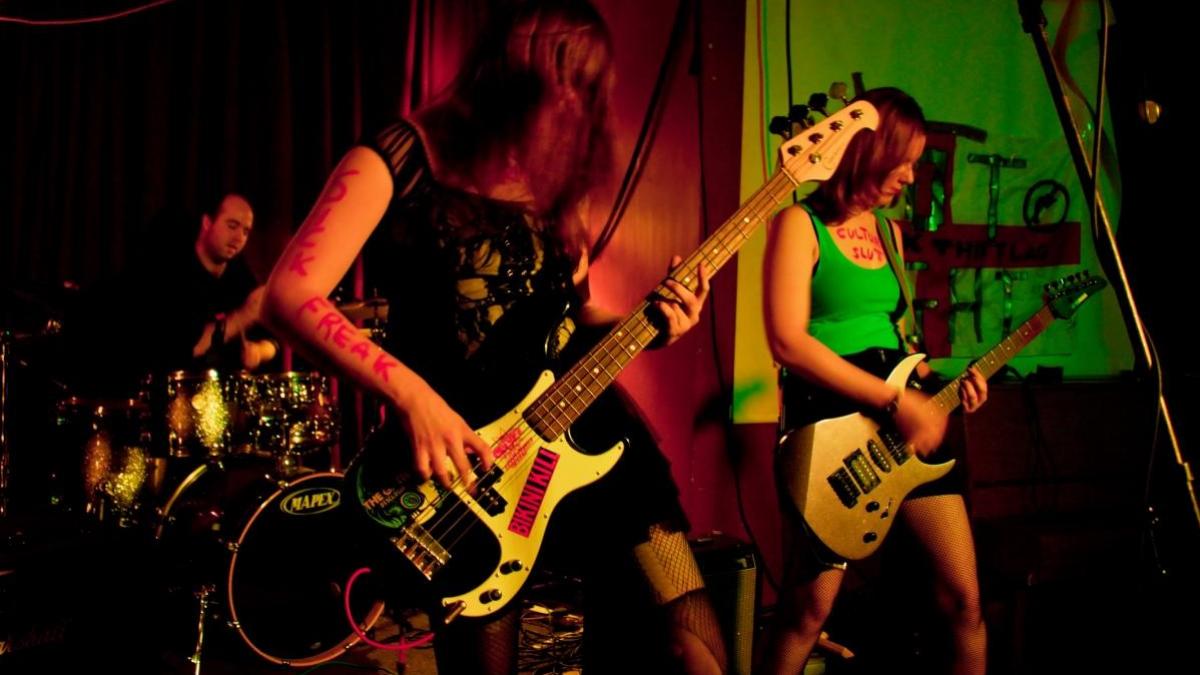 Kirsty Lohman performing with Not Right at Revolt in Coventry, 13 October 2012. Photo kindly reproduced with permission from Krissie Pearse.

At present there is tension within feminist movements, as a new generation’s ideas and practices are pitted against traditional liberal approaches, with wider implications for debates around representation and freedom of speech. These debates sometimes become vitriolic and factionalised as activists conduct their arguments online. Tensions also play out within feminist music scenes, where musicians and organisers are trying to address the historically thorny issue of punks’ inclusion of marginalised communities. In this way they form a microcosm through which to examine wider shifts in political theory, culture and practice.

Punk, being more than a style of music, has a do-it-yourself (DIY) ethos and openness to outsiders that has proved crucial in providing cultural and social space to people from marginalised groups for over forty years. However, a growing culture of hypermasculinity came to dominate punk scenes during the 1980s. ‘Riot grrrl’, a form of punk, provided space in the 1990s for many – particularly women – sidelined by the mainstreaming of punk circles. The 1990s riot grrrl movement, however, has been criticised for not adequately providing space for women of colour or individuals with queer gender presentations; whilst early punk and later riot grrrl claimed ‘openness’ they remained subject to wider structural issues in regards to gender, class, (dis)ability and race.

A new wave of feminist-inspired punk bands and club nights emerged in the UK during the late 2000s. In seeking to address criticisms of earlier riot grrrl, many of these contemporary scenes draw explicitly on intersectional feminist thinking, which acknowledges the multiplicity of identities marginalised by mainstream society. Issues of accessibility and marginalisation are not simply theorised, but actively addressed in practice as punks attempt to make their spaces more open. Political ideas are deeply enmeshed in cultural practices that include music, (fan)zine creation, and educational workshop events such as ‘LaDIYfests’.

Feminist punk scenes engage in and draw on wider shifts in feminist debate. Notably, it is in the spheres of sexuality and gender that feminist punk scenes are becoming more inclusive, reflecting broader cultural changes that include the increasing prominence of transgender activism and the legal recognition of same-sex partnerships. Members of feminist punk scenes continue to struggle particularly, however, with structural obstacles in regards to class, (dis)ability and race. The various successes and failures of the feminist punk scenes highlight the complex relationship between theory, practice, subcultural aims, and mainstream social and cultural shifts.

With this study I therefore will focus on the connected nature of individuals, groups, and wider social processes. To this end I will combine a broad mapping of the connections within and beyond feminist punk scenes, contemporaneously and historically, with an in-depth sociological analysis of cultural and political production.