Borderline geoscience and transatlantic literature in the age of lost worlds

Focusing on a time of porous professional boundaries in geoscience, Richard Fallon’s project asks how strange and controversial texts were crafted, published and evaluated 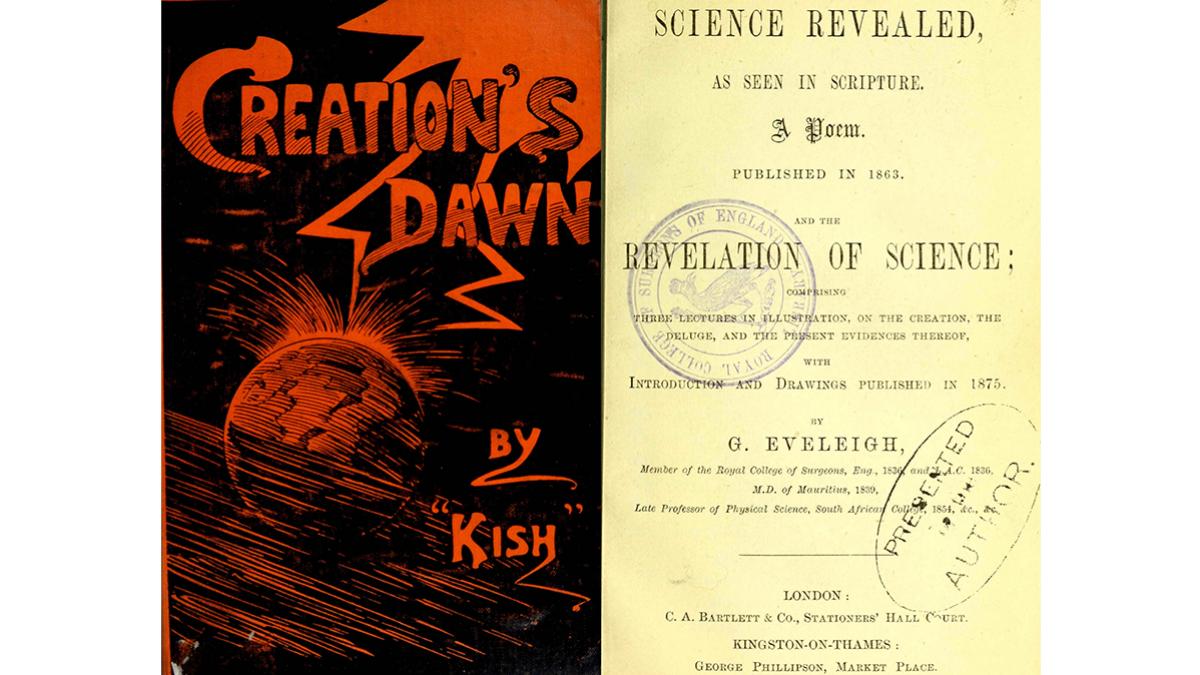 Left: The front cover of Creation’s Dawn (1908), a pseudonymous attempt to reconcile aspects of the Book of Genesis with geology. Right: George Eveleigh, Science Revealed, as Seen in Scripture. A Poem. Published in 1863.

During the late nineteenth and early twentieth centuries, researchers locked horns over fundamental aspects of planetary prehistory. If evolution was real, for example, how did it work? Where had human life begun? Were continents stationary or mobile? A wide variety of figures both within and beyond the elite scientific community addressed these questions, frequently relating them to controversial subjects like religion. Sometimes authors even tackled disputes through the immensely popular genre of ‘lost world’ fiction. Indeed, the uneven professionalisation of geoscientific research generated a heterogenous culture, the nature of which has received only patchy scholarly attention. While some who wrote on geoscience, like the occultist Helena Blavatsky, positioned themselves as outsiders, others, including British MP Henry Howorth, published their outlandish claims in the pages of the prestigious Geological Magazine.

My project seeks to determine how researchers and the general public navigated this amorphous terrain. Historians have shown that the identity of the scientific practitioner in the anglophone sphere was being redefined during this period, broadly becoming more secular, more specialist, and more securely employed. The positions of figures who did not meet these new standards, however, remain unclear. I suggest that literary studies can help shed light on these ‘borderline’ figures. The generic frameworks and literary techniques of a scientific text, for instance, are valuable but underutilised indicators of an author’s perceptions both of scientific method and of scientific community.

The project concentrates on Britain, Canada, and the United States, imperial centres of scientific research and burgeoning literary hubs. I have selected as case studies three types of geoscientific writing on the borders of science. The first is the lost world novel, especially those written by scientists interested in the paranormal. The second is the religious geohistorical treatise; here I will range from the musings of esteemed Christian geologists to the cosmogonic pamphlets of the esotericist fringe. My final object of study is the ‘eccentric’ geological monograph, a wide category of mavericks who defied the conventions of scientific publishing. By analysing the form, content and critical reception of these diverse texts, I hope to discover how the literary conventions and disciplinary boundaries of the earth sciences were mutually shaped.

Thumbnail: a speculative reconstruction of North America at the end of the Mesozoic Era, taken from William Diller Matthew’s Dinosaurs (1915).